This post may contain affiliate links. (Disclaimer here) And if you think you've seen this post somewhere before it may have been on my other site TheWingedFork.com

U-Boot is a beer cocktail that is made by mixing beer and vodka. All you have to do is dunk a shot glass of vodka into a pint glass of beer and your drink is ready! It’s as easy as making ginger wine soda.

It is one of the popular drinks in parts of Europe and the type of beer used differs from place to place. It gets its name from the German submarine word Unterseeboot or U-boot, as the shot glass sinks to the bottom and then re-surfaces when you finish your drink. It is also known by various other submarine names in different countries of the world – U-boat, submarino, depth charge, or Ubat, and more.

You can find our Indian version of this cocktail here below. The perfect shot!

How to make U-boot Cocktail

The u-boot recipe is really simple, just like the boilermaker. To make a u-boot simply fill a glass with beer and drop a shot of vodka in it. The tradition is to drink it quickly, or try to at least!

You can use any beer or vodka of your choice here. We just used the strong beer because we wanted a more bitter flavor.

FAQs About The U-Boot Cocktail Drink

It is called a ‘Duikboot’ in Flanders and the Netherlands. In North Macedonia it is called “Подморница” – “Podmornica”. In Mexico and Brazil, it is called ‘Submarino’. In Russia, it is most often called “Глубинная бомба”, Russian for “Depth charge”. In Sweden, it is called ‘Ubåt’and in Greece, it is called ‘υποβρύχιο’ which means submarine.

It is called U-Boot because the vodka shot glass sinks to the bottom of the beer glass and then re-surfaces when you finish your drink, just like a submarine. 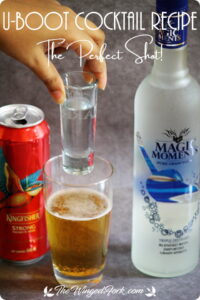 Sarah
U-Boot is a beer cocktail that is made by dunking a shot glass of vodka into a pint glass of beer!
5 out of 5 Stars!

Toggle to prevent your screen from going dark while cooking

*As an Amazon Associate I earn from qualifying purchases.

Disclaimer: Nutrition Information per serving is estimated by a third party software based on the ingredients used, and is for informational purposes only. It will vary from product to product, based on methods of preparation, origin and freshness of ingredients. Please consult the package labels of the ingredients you use, or chat with your dietician for specific details.

Tried this recipe?Share your images in our Facebook group! 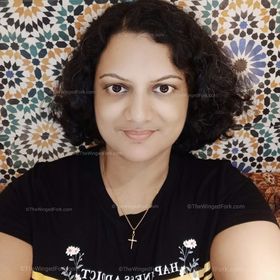 Heya, I’m Abby! I’m an East Indian foodie from Bombay, India who loves baking and making homemade wines and experimenting with food. Find out more about me here.

This website uses cookies so that we can provide you with the best user experience possible. Cookie information is stored in your browser and performs functions such as recognising you when you return to our website and helping our team to understand which sections of the website you find most interesting and useful.

Strictly Necessary Cookie should be enabled at all times so that we can save your preferences for cookie settings.

If you disable this cookie, we will not be able to save your preferences. This means that every time you visit this website you will need to enable or disable cookies again.